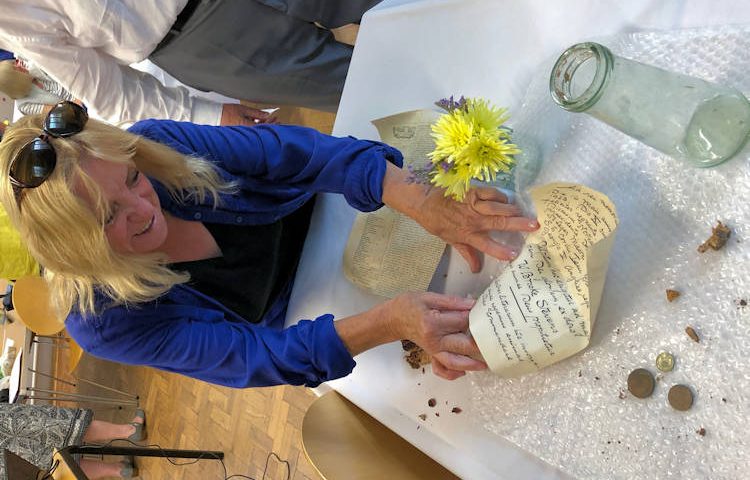 An almost 100-year-old time capsule, discovered under the pulpit of The Sacred Heart Church in Southwold during renovations, has been opened to reveal some fascinating items. Cedric Burton reports. 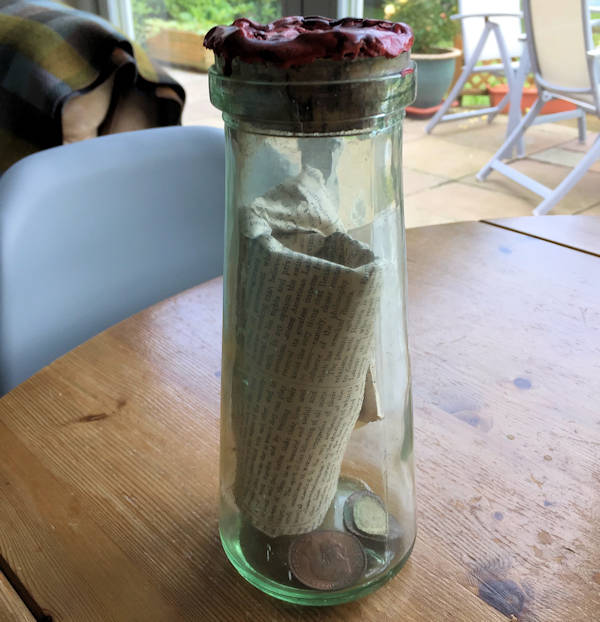 Southwold parishioners gathered in the Cardinal Newman Hall recently to witness the opening of the time capsule discovered under the pulpit by contractors working to repair and renovate the church.

Artefacts had been placed in a bottle, possibly a milk bottle, of thick glass sealed with a cork and wax.  A wax seal depicts the Lamb of God with what appears to be the Union Flag rather than the cross on His staff.

Anticipation grew as the cork was finally removed and the contents revealed.  There was a scroll in Latin in beautiful script, giving the date May 15, 1923, names of the Pope (Pius XI) and the Bishop of Northampton.  Also included were the names of the donor of the pulpit and the parish priest, Fr Henry St Leger Mason, who buried the time capsule.

Fr Henry served as parish priest in Southwold for his entire priestly career from 1897 until his death in 1940.  He had also included six pages from the May 15, 1923, edition of The Times, three contemporary coins and a photograph of himself.

Sadly the photograph has degraded quite considerably but seems to be of him holding the time capsule.  Work will be undertaken to attempt to enhance the image.

After work to conserve the contents and copies being taken, we plan to add items reflecting the current period in the church’s history and to bury it all under a new ambo which is being made from the pulpit’s stonework.

Dr Louise Hampson, from the Centre for the Study of Christianity and Culture at York University, working with parishioners on interpretation of the church for visitors, explained that the custom for using time capsules was quite prevalent at the turn of the 19th/20th centuries.

The renovation work is part of a £220,000 heritage project, with the help of the Heritage Lottery Fund, to renovate and restore the church and make its history more accessible to visitors including new lighting, digital technology and a viewing platform in the tower. Read more here.

Pictured top is parishioner Trisha Scott looking at the contents of the 1923 time capsule, itself picture above.