Altar servers enjoy Mass and a barbecue in Norwich 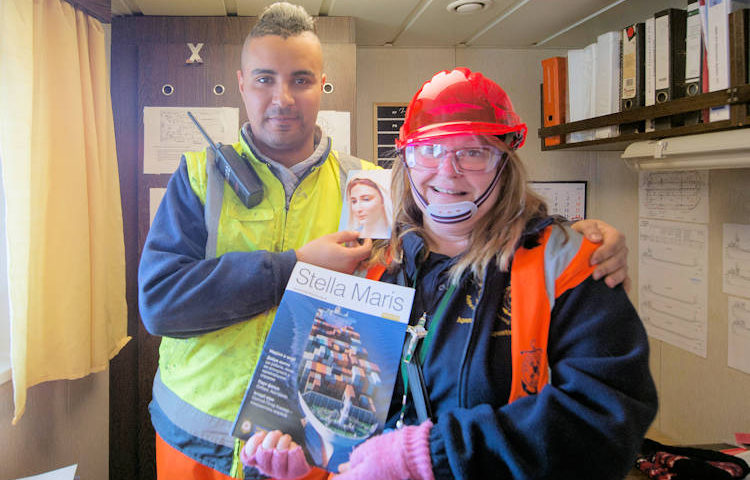 To mark Sea Sunday on July 14, former ship’s captain and new vice-chair of Stella Maris, Apostleship of the Sea (AoS), tells Greg Watts what it is like behind the wheel on the bridge of a ship.

Being the captain of a ship is one of those occupations that elicit fascination and awe from people.  It’s a job cloaked in mystique and romance. Esteban Pacha, the new vice-chair of Stella Maris, Apostleship of the Sea (AoS) can tell you all about what it’s like to be behind the wheel on the bridge of a ship – he’s done it.

Esteban was a captain in the merchant navy in his native Spain.  Ever since he was a child, he had wanted to go to sea. And his dream came true at the age of 21 following three years of study at the Polytechnic University of Catalonia, where he learned to sail dinghies and small boats.

“Being a ship’s master is a great honour and an enormous responsibility,” he said. “In my view, commanding a ship requires a complex mix of professional skills. You have full responsibility over a vessel, her crew, passengers and cargo on board.

“It is not just being responsible for the navigation and the safe passage of the vessel. The captain is also duty-bound to protect the marine environment and the well-being of the crew and passengers on board.

“Your responsibilities also include management of the day-to-day business pertaining to a ship, including operational maintenance, maritime safety and security, cargo handling, legal, commercial and financial matters, etc.”

Seafaring is a tough job and one that involves working in one of the world’s most dangerous and inhospitable environments.

Esteban discovered how treacherous the sea can be on a voyage from the Gulf of Mexico to Northern Europe when his tanker was battered by Hurricane Gloria in the middle of the Atlantic.

During his ten years at sea, he got to know the valuable work done by AoS port chaplains, which is why last year he agreed to become the vice-chair of AoS, a role he combines with his job as an attache at the Spanish embassy in London.

“I have memories of my visits to Stella Maris facilities in different ports of the world,” he said. “When as a young officer, I had an urgent need to contact my family in Spain while I was at sea. When I arrived in port, an AoS chaplain took me to the local Stella Maris centre, where I could have access to a telephone land line. This was of course well before mobile phones and today’s web-based applications had been developed.”

In the Diocese of East Anglia, seafarers from around the world find the same sort of help from

One of the hardest things seafarers have to cope with is being away from their families for months at a time.  Most of the world’s 1.5 million seafarers come from poorer regions of the world, such as the Philippines and India, and going to sea is the best way they can provide for their families.

Esteban is passionate about the welfare of seafarers, who endure isolation, loneliness, and danger in order to bring us so many of the goods we rely on in daily life. Cars, computers, fuel, food, these are just some of the things that arrive in the UK by ship.

The Church acknowledges the vital of role seafarers and of AoS port chaplains and volunteer ship visitors by designating July 14 as Sea Sunday.

“AoS chaplains provide a home away from home for seafarers who are abandoned or are sick in hospital,” said Esteban. “And of course, our chaplains offer pastoral care and assistance when required by those on board after so many months at sea.

“Chaplains are the arm around the shoulder of a seafarer grieving for a colleague, the friendly face who turns up on board to welcome them to our ports, the ones facilitating endless phone-calls when they feel homesick or helping them to overcome stress or mental problems. I am so proud of their work and dedication, and will continue supporting them in any way I can.”

Pictured above is AoS port chaplain in Ipswich and Felixstowe, Pat Ezra.