Be the first to read October Catholic East Anglia 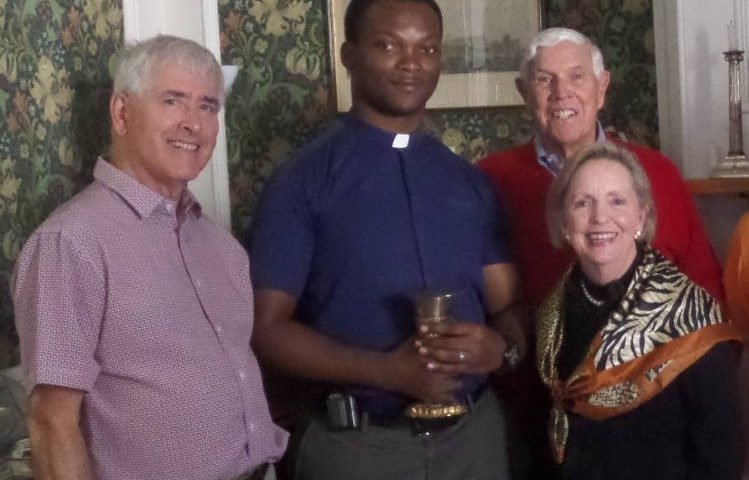 A 400-year-old chalice has been returned to the Catholic Church at Bury St Edmunds after being in the USA since the end of the Second World War reports John Saunders.

The chalice bears a remarkable history that highlights the friendship and gratitude of priests from St Edmund’s Church in the town towards an American chaplain, Major Joseph (Joe) N Collins who was based at Rougham Airfield during the war.

Whilst at Rougham, Fr Joe was responsible for ministering to those based there, a role that coped with every aspect of war, bereavement and particularly the problems facing the young American servicemen.  On leaving Rougham in 1945 he was presented with the gift of a Flemish/Spanish chalice dating back to around 1600 and a paten (plate) by Frs Lockyer and Throckmorton in gratitude for what he had done whilst chaplain.

On his death in 1984, the items passed to his nephew Bill Christie who decided it would have been Fr Joe’s wish for them to eventually return to Bury St Edmunds.  The ideal opportunity came at the end of a cruise and Bill and his wife Maryann stopped off in England.  On September 17 they met Fr Alvan Ibeh and members of the parish at St Edmund’s Church and, after reading the 1945 letter which accompanied the donation to his uncle, he handed over the chalice and paten.

Their adventure continued with a visit to Rougham Airfield arranged by Clifford Fullam, the Tower Manager and Education Officer, where Bill and Maryann were able to see the now disused hut which served as a chapel before continuing to view the excellent museum within the control tower.  As Clifford said: “We have so much here to show what wartime was really like and where you realise how young so many of the servicemen were and the extent of their contribution.”

Whilst at the airfield they were introduced to Terry Pettitt, a parishioner of St Edmund’s.  Now in his eighties, he recalled how as a child he was indebted to the Americans for their kindness at times when many locals were suffering extreme poverty.  Terry still possesses a prayer book that was given to him during the time of Fr Joe’s tenure at Rougham.

Their tours also included a viewing of the chapel and church where they marvelled at the beauty of the interior.  After lunch they accompanied John Saunders, Chairman of the Church History Group, on a personal mini-tour of the town where he explained places having a special connection with the United States, including the Angel Hill/Athenaeum, the Abbey Gardens, the world’s first internet bench, the John Tate Appleby Rose Garden and Cenotaph, Magna Carta, Gosnold’s plaque at the Charnel House and the interior of the cathedral.

Bill said: “Fr Joe would be looking down on us today smiling with satisfaction as we tread in his footsteps.”

Bill and Maryann were extremely impressed with the Rose Garden and valued it as a place of tranquillity where those whose lives were lost in campaigns could be remembered.  Bill said: “John Appleby certainly created a legacy which I am sure people will be proud of, it is important that we can come here and be able to see that the people of the town still observe the sacrifices of war.”

As a memento they were presented with a copy of Appleby’s book Suffolk Summer which not only gave an account of his time in Bury St Edmunds during the war years but referenced his love of St Edmund’s Church, and books relating to St Edmund’s School and the church.

Canon Mark Hackeson had been absent from the occasion which coincided with a pilgrimage to Jerusalem, but upon his return he said: “On behalf of the Parish, and indeed our Bishop I would like once again to thank Bill and Maryann for their kind donation of this historic chalice.  It will be used on special days, such as the Solemnity of St Edmund of East Anglia, our parish patron who was once the patron saint of all England.”

The chalice and paten have been safely deposited pending further research but arrangements are currently being made for them to be exhibited at the Church and details will be announced in the future.

Pictured above, the chalice is presented in Bury St Edmunds, by Bill and Maryann Christie, right to Fr Alvan Ibeh, watched by John Saunders.