Diocese of East Anglia Yearbook and Calendar is out

Pilgrims witness to the Sanctity of Life 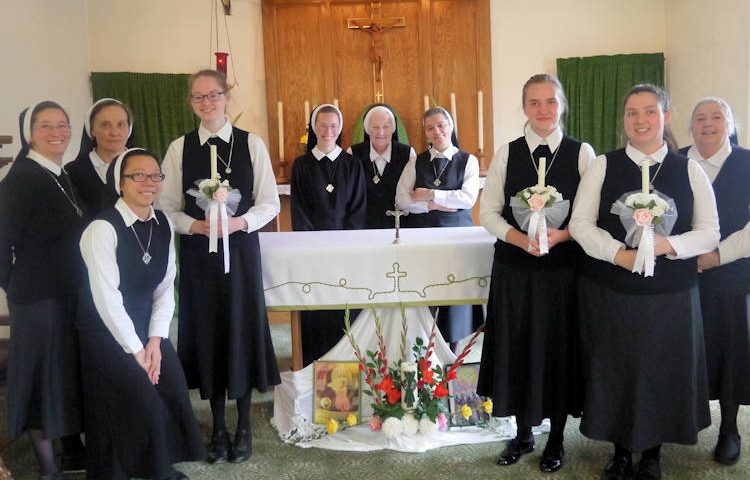 Three young women have been accepted as Postulants with the Daughters of Divine Charity at their convent in Swaffham.

The Sisters – who became famous through the Channel 5 reality TV series ‘Bad Habits’ – welcomed the newcomers at a special service on September 8.

Jolanta Wasag, Niamh Rodda and Jennifer Kamps had been staying with the Sisters for a year as Candidates, and discerning their vocations. They will now continue their formation as Postulants for a year before they enter the Novitiate.

Jennie (Jennifer) shared: “I can remember leaving the National Youth Congress ‘Flame’ in the summer of 2012, with this phrase on my heart: ‘I never even asked God what He wanted me to do with my life.’ These words have stayed with me ever since. 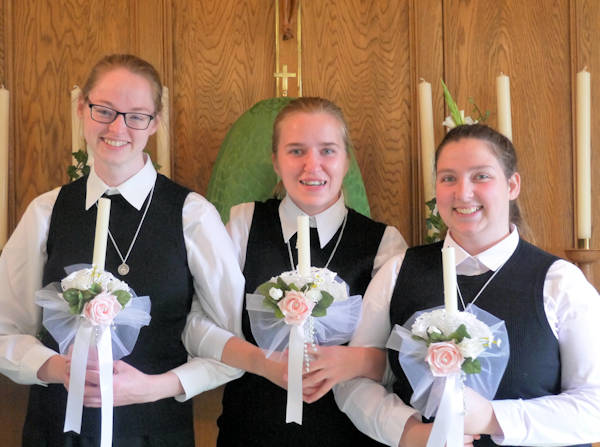 “During sixth form, quiet, gentle thoughts kept surfacing: ‘What if I became a religious sister?’ However, I went to university and these thoughts became lost to the noise of life. Until I was in the summer of my third year, when the gentle whispering became so frequent and clear that I couldn’t keep walking my own path, the path I thought I wanted. I couldn’t ignore this prompting. I began a journey of acceptance and, in time, grew to desire this path God was encouraging me to take.

“Many friends, family, priests and religious have supported me with encouragement, guidance and prayer, which gave me the courage to ask to enter the Congregation of the Daughters of Divine Charity. I have just been received into Postulancy and I can say with confidence, God is good. He is certainly full of surprises, but He has given me the grace to know that I am not alone.”

The Sisters in Swaffham are beginning a new phase in their apostolate. After 105 years of teaching in Swaffham at the Independent Sacred Heart School, they have leased for a peppercorn rate a large proportion of their land and buildings to the Diocese of East Anglia. The new VA Primary School started at the beginning of September 2019.

“This is a great achievement on behalf of the Sisters, the Diocese and Norfolk County Council,” said Sr Francis.

“One idea for the convent is that the Diocesan Youth Team would run retreats for young people in the Convent Building,” said Sr Francis.

“God always works in mysterious ways and sometimes He tests our faith,” she added. “The Sisters, and many people in the area, would also like us to be able to keep the Barn with its theatre, art, pottery and music facilities for use by the people of the town. This building would also require a sponsor and local support. God is never outdone in generosity, so the Sisters wait in anticipation of a small miracle. If he can provide three willing girls to give their lives wholeheartedly to Him he can inspire more generosity.”